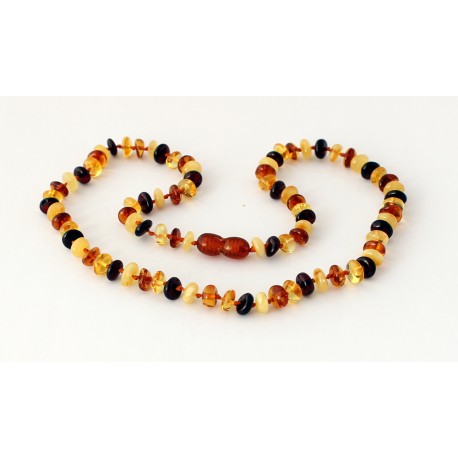 All amber necklaces are made of genuine Baltic amber.

Since ancient times amber was referred the as a healing power. Even in ancient times, amber, especially succinic acid, was used in pharmacology.

Used by Europeans for centuries, amber is a natural analgesic and has pain-relieving qualities. When amber warms up to body temperature, succinic acid starts to vaporize, and it holds down the inflammatory reactions.

According to scientists, the Baltic amber – is 50 million years ago during the Eocene period hardened resin of conifers. The accumulated resin was washed by river from the forest soil and banked up south to the sea. Over time, due to oxidation and polymerization processes, fossil resin changed to amber. The Baltic sea amber from the above-mentioned resin of conifers has formed over 2 million years, taking on a variety of forms, colors, and sometimes „giving shelter“ to different fossils.